Halloween in Disney World 2021 – What to Expect?

Disney World December 2022 Events That You Must Attend

How to Plan Camping in Fort Wilderness at Disney World

Halloween is a festival that is right up there with Christmas in terms of its popularity and marketability. It is, therefore, no wonder that Halloween in Disney World is one of its most popular events to anticipate.

It is also fascinating to note how Disney’s incorporation of Halloween as a marketed and targeted festival has helped in the iconic commercialization of the festival across all boards.

Halloween costumes are a big part of that tradition. People get dressed in various designs and iteration of popular Disney characters or characters from animated movies or cartoons.

So, we will see now what all kinds of things you can expect to experience when you travel to Florida for a truly spectacular and magical ride to Disney World.

A short guide to everything Disney Halloween

Halloween in Disney World is one of the most celebrated and long-lasting of all occasions. It usually begins at the start of August and lasts well into October, sometimes even beyond that.

This year, Halloween at Disney is going to last till the end of October. This blog post right here will guide you through the itinerary that Halloween in Disney world has for you in the year 2021!

You also have Hollywood Studios and Animal Kingdom to resorts, merch, and food events; we have you all covered! We will guide you through everything you require to spend a spooky-good time here during Halloween at Disneyland 2021.

Disney Halloween decorations begin from roughly the last of August and even in early September. Magic Kingdom, however, starts from much sooner. The kind of crowd you will encounter during Halloween at Disneyland 2021 will vary depending on the new rules and protocols under the Covid situation and travel restrictions. But usually, vacations and weekends are very busy here.

Most likely, September is the best time to go to Disney World to celebrate Halloween in Disney World. October this year around will be a very busy year as this marks the 50th-anniversary celebration of Walt Disney World.

Top attractions this year on Halloween at Disney World:

The Halloween party: After Hours Boo Bash, the liveliest Halloween party you’ll ever attend! This party is held in Magic Kingdom between particular nights till October 31st. This event is a relatively new event for Halloween in Disney world and attracts relatively lesser crowds, and the queue time is relatively shorter.

The main attraction of this event is, of course, the ‘less crowd’ part. Halloween costumes are a special attraction. There are also special Halloween entertainments and characters dressed according to the themes.

The price of the tickets is a bit steep. For every individual, the ticket to Boo Bash begins at $120. Mickey’s Not So Scary Halloween Party was its predecessor. Hocus Pocus and the very popular parade have been canceled for the year 2021.

Through the first week of November, you can dine at Minnie’s Halloween Dine. The food cooked here is seasonal and thematic. A ‘monster feast’ beckons you at the table. There is no buffet style of food-serving here.

Characters like Mickey Mouse, Minnie Mouse, and the group will appear during meal times. The décor and the music and the food everything is Halloween-themed. During these appearances, usual character interactions aren’t allowed. Though sometimes, the characters would stop or pose from afar for photographs and selfies.

Mickey Head Pumpkin Wreaths are one of the most iconic decorations for Halloween in Disney world, decorated on lamp-posts. They are found throughout Main Street as well as Central Plaza, located near the Cinderella Castle.

Pumpkins line the second story of the shops on Main Street. The decorations on every pumpkin reflect the particular businesses that the shops run. Autumnal light settings, wreaths, and more autumnal and Halloween decorations decorate the location, the shops, and the streets. 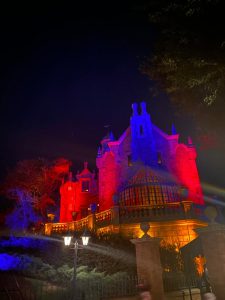 Throughout the place, Cinderella’s themes are interwoven. Halloween in Disney World takes special care to create a magical surrounding by making special coaches of pumpkins. These magical coaches were installed at the park in late September.

Due to the current situation, not every item on the Halloween decorations list could make it up to the forefront. For example, the ‘Pumpkin People’ and the ‘Scarecrow Citizens’ of the Town Square and Main Street haven’t been installed.

Through the Halloween months, ‘Fall at Springs’ is a feature that many enjoy, where the entire location gets dressed up according to the seasonal decorations.

People can take photos at convenient backgrounds and have an assortment of treats and entertainment. You feel more Halloween-y at Disney Spring than anywhere else.

The range of themed Halloween merchandise and Disney Halloween costumes at different shops and resorts at Disney Springs will attract everyone.

You can find things for Halloween at Disneyland 2021 range from Pumpkin Mickey Ear Band, Pumpkin Mickey, and many more. Though the range offered is a little bit scaled back this year.

Fort Wilderness Resort & Campground, the very fun and exciting event takes place. They show The Legend of Sleepy Hollow (1949) in the evening inside the resort.

Guests get to see and meet ghosts on horseback and experience the thrill of meeting the creepy Headless Horseman. There are also Halloween-themed desserts and other food items. However, whether this event would be held this year as well is not yet clear. It might come back in 2022.

These two are happening all year round, but they have certain pumpkin-themed snacks, desserts to enjoy during Halloween!

This year, Howl-O-Scream at SeaWorld is a fun, thrilling, and scary adventure where guests have to hide and sneak and escape a house filled with horrors. There is also the feature of a haunting song that may or may not be calling people to their watery doom. This event will presumably be an experience of 27 days.

Halloween in Disney world is very much known for the great variety of tasty food. The food ranges from simple and intricate desserts to delicious spooky treats. There are different places to eat. You will find a good variety of food everywhere. The vast varieties of food are one of the many selling points as to why you can spend Halloween here at Disney World in Magic Kingdom.

The names of some of the resorts selling tasty Halloween-themed food are: Animal Kingdom Lodge has the Sanaa and Sanaa Lounge, then the Gasparilla Island Grill at Grand Floridian Resort & Spa.

You also have the Gurgling Suitcase Libations & Spirits as well as Olivia’s Café. Geyser Point at Disney’s Lodge is also very popular. At the Wilderness Lodge, Roaring Fork is also a good option.

13. At Hollywood Studios and EPCOT

Sunshine Day Bar, Outdoor Carts, and Animation Bar are quite popular too. Woody’s Lunch Box and PizzeRizzo are also very famous places to dine. At Epcot, you will have the Canada Popcorn Cart and Block & Hans.

14. Delicious treats for everyone

Some famous foods that you can enjoy with your family and friends here include but are not at all limited to are the Sea Witch’s Brew, Hocus Pocus Amuck Cakes, Mini Halloween Cake, Be-Witching Minnie Mouse Cupcake, Jack Skellington Pumpkin Pie Pop, Poisoned Delight. 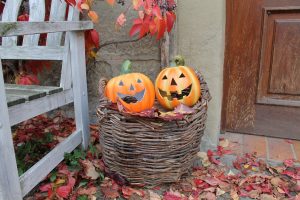 Be a part of the memorable experience

Walt Disney World during Christmas is indeed a sight to behold, but during the Halloween season, the Disney world comes alive as if in preparation for the Christmas fun time.

So, Halloween in Disney World is an exciting and fun adventure if you can make it to Florida in time. The exciting features of the Pandora World of Avatar, the Star Tunnel, or Pirates queue soundtrack will make the entire stay at Orlando even more magical and worthwhile.

Halloween in Disney world is a time of colors of the fall, seasonal food, and bright lights and decorations. The big variety of food that one can find in Disney world is truly staggering, and the resorts and cafes have tastes and flavors that would suit all kinds of people across all ages.

The food here really is the selling point of the Halloween season in Disney world and the exciting special attractions and experiences already mentioned above.

Nonetheless, you can still have a truly wonderful and magical experience here at Disney world. So much thrill and fun adventure await you here. As Halloween is a special occasion and the big event and breaks before thanksgiving and Hanukah and Christmas, it only stands to reason that you all will be interested in spending this time with your family and friends here. 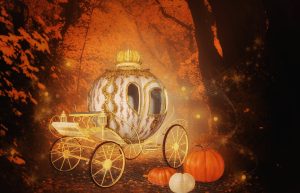 So, this is where the guide to spending Halloween in Disney world. Disney Halloween is celebrated in Florida with much fanfare. But that is either because of the anniversary year or because of the current situation with the pandemic.

We hope you will have found this guide comprehensive and useful if you plan a lovely trip to Walt Disney World this October. The Christmas season at Disney World is a grander event; the Halloween season lasts for a month longer than the comparatively two-month window.

For celebrating Halloween in Disney World, you will get access to Magic Kingdom and Disney Springs along with some other places.

Previous articleHaunted Mansion Disney World Ride to Welcome Halloween Season
Next articleAnyone else obsessed with #tatooine / @disneygalaxysedge ?? We are not obsessed at alllll…. 😂😂😂

Disney World Tips to Overcome All Stress During Your Trip