Is Sing 2 on Disney Plus and What Is the Storyline of the Movie?

The Little Mermaid 2023 teaser came out three days ago, and Twitter and TikTok have been flooded with emotions! While the critics have bittersweet inputs, we cannot help but ignore the little girls crying out of joy because of the inclusive representation.

So, here at Disney Wire, we have spoken quite a lot about all the fun things that happened at D23 Expo hosted between September 10 and 13. However, one insight you might not know yet is that the first look of The Little Mermaid 2023 came out. Yes! D23 exhibited the first look of the new Ariel, and Halle Bailey is in the lead.

With a whopping 3.2 million followers on Instagram, this American singer/actress is quite under the limelight. The live-action Disney movie representing Ariel’s famous Walt Disney character as a ‘brown’ mermaid is all heart!

About The Little Mermaid 2023

Disney fans are not unfamiliar with the beautiful mermaid princess Ariel. While the original film came out in 1989, there have been several takes on the character and its stories throughout the last three decades.

The Little Mermaid 2023 is a brand-new take on Ariel due to its representation. However, the basic narrative remains the same. The King Triton in this film is Javier Bardem, while Prince Eric’s character comes to life with Jonah Hauer-King.

An evident love story followed by conflicts fueled by an evil sea witch Ursula (characterized by Melissa McCarthy), is all set to create expected storylines amidst unexpected twists and turns.

As soon as D23 exhibited the trailer at the event last week, the teaser on YouTube began to trend. Currently, it has over 11 million views on the Walt Disney Studios channel, and people are in complete awe!

In the clip, we find our beloved Ariel swimming through the underwaters, exposing the lower extremity of her mermaid body. The background music suggests “Part of Your World.”

This teaser breaks many records with worldwide views of over 104 million across many online channels and streaming platforms. For instance, Cruella was at 68 million, Beauty and the Beast was at 94 million, and Alladin at 74 million.

Interestingly, the Queen’s demise led to the exclusion of viewership count from Ireland, Australia, and of course, the UK. So, even without a large audience base across these countries, this teaser outshone the rest above.

On Friday, September 10, The Little Mermaid topped trends on Reddit and YouTube Movies. Actresses like Halle Berry, Zendaya, Nicki Minaj, and many more took to their social media to praise.

It is interesting to note that people present at D23 became silent during Halle Bailey’s face reveal. Some members became extremely emotional during the background music, while some reported yelling, “she is so good.” Many people in the audience revealed having goosebumps all over. Disney finally did it!

Shockingly, a video taken inside the D23 Expo started doing rounds where the crowd was shouting and yelling. However, it was soon deleted. We do not know much about this, but it is believed that not everyone had a happy reaction at the event.

Again, the world online has a completely different perspective, so read the next section to know more about it.

As soon as the teaser went viral, a TikTok trend followed! So beautiful brown mommies with even more beautiful daughters came under the limelight by sharing their reactions. As soon as one reaction video hit the charts, other women with little daughters followed it.

In these videos, the mothers record their daughter’s reaction when seeing Halle Bailey’s face. While we are unaware of how concepts of inclusivity or racism are clear in these little girls’ minds, they were surely taken aback by seeing a Disney Princess look like them!

All across social media, brown girls began sharing their joy and expressed how it finally feels to be like a Disney princess. While, as per records, the character of Tiana was the first ever black Disney princess, having a brown Ariel means something different to the community.

One video showed a little girl sitting up when she saw Ariel on the screen, all baffled and amazed. Another girl on Twitter shared emotions because now a Disney princess looked like her. Again, one girl’s face only blushed while saying, “I think she’s brown. Brown Ariel is cute”.

A video of twin girls wearing Tiana costume looked jaw-dropped while watching brown Ariel on screen. The lead actress herself shared a video where a little girl asked someone around her, “that is Ariel?” all surprised and happy!

Again, another video included three sisters aged 2, 6, and 7. One of them shouts in excitement, exclaiming, “she’s black!” 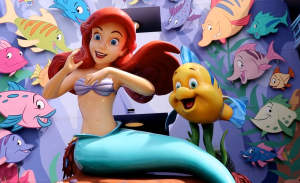 Why does this matter?

Well, representation matters! It is 2022, and it is time we start becoming more inclusive, breaking the shackles of racism, and accepting people of all colors. The little girls’ reactions prove how important it is to have Disney characters that look like them and relate to them.

Disney has been doing a great job of bringing inclusivity. Also, this is not the first time they have done this. However, a beautiful character like Ariel, when turned dusky, makes them take a bigger stand than they have to date.

For a complete cinematic experience, we have to wait till May 26, 2023.

Ticket to Disneyland Florida: What Are the Different Types?